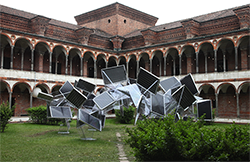 In his installation PHOTOSYNTHESIS, which was presented in Milan in 2012, architect Hirata experiments with three-dimensional solar cell forms.
>>
>>

“The project was inspired by a reflection on the natural relationship that exists in a tree between its leaves, fruits, and flowers, a truly interdependent cyclical ecosystem in miniature. this prompted me to envision new buildings and cities as an integral part of the biosphere, a possible future that is inspired by an modeled after it.” (Akihisa Hirata)