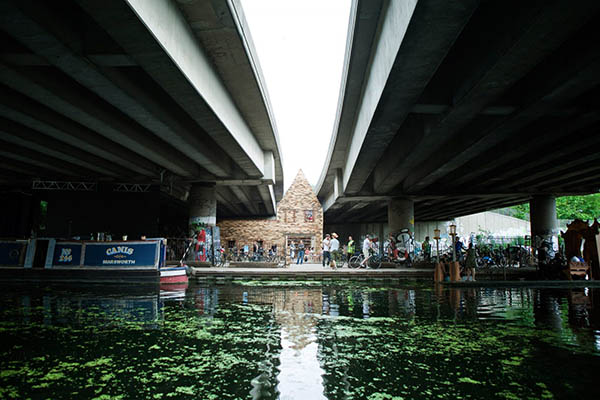 For FOLLY FOR A FLYOVER, the multi-disciplinary art collective Assemble transformed the unused space below a flyover into a new public space and arts venue. With the help of volunteers, Assemble built a folly that appeared to be stuck between two lanes of the motorway.
>>

“Starting with the idea that how spaces are imagined is often as important as their physical characteristics in determining their use, the Folly reclaimed the future of the site by re-imagining its past. The new ‘fairy tale’ for the site described the Folly as the home of a stubborn landlord who refused to move to make way for the motorway, which was subsequently built around him, leaving him with his pitched roof stuck between the East and Westbound lanes.” (Assemble)