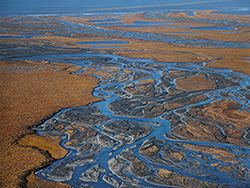 Banerjee’s ARCTIC SERIES consists of photographs taken in Alaska, Yukon and the Sakha Republic of Siberia grouped into three sets of colour. The brown photo set, for instance, shows pictures of the Hulahula-Okpilak Delta in Alaska, where millions of migratory birds nest every spring and which lies above large oil and gas reserves.
>>
>>

“Up in the north, I have been working with three motifs. The first is colour—not as a medium but as a motif. It is a political choice. In the popular conception around the world, the Arctic is primarily thought to be a space of ‘snow and ice’ and ‘ice and snow’. In the words of pro–oil–development USA politicians, the Arctic has been variously described as ‘flat white nothingness’, ‘frozen wasteland of snow and ice’ and ‘barren wasteland’. In the popular TV program 60 Minutes, it was described as ‘hostile wasteland’. I began to ask: Can I make a photograph with only brown; white and brown; only grey; white, grey and brown; white, blue and brown; only green; green and blue? … Colour, I thought, would be a wonderful visual language to help us unlearn some of these intolerances.” (Subhankar Banerjee)